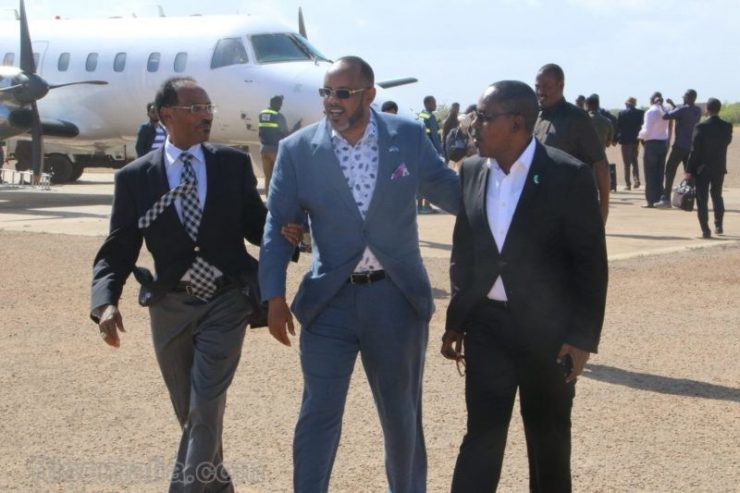 An FGS delegation led by the FGS Minister of Finance Mr. Abdirahman Duale Bayle, along with other members have arrived in Kismayo, the headquarters of Jubaland.

The delegation includes Finance Ministers from regional governments of Somalia.

This is the first time FGS cabinet members set foot in Kismayo, after president Madobe is re-elected as the President of Jubaland State, an elections that was heavily criticised by Mogadishu.

Abdirashid Jire Qalinle, Jubaland Minister of Finance, and other members of the Jubaland cabinet have warmly welcomed the delegation at Kismayo airport.

Minister Bayle and his delegation are in Kismayo to attend a conference in which pressing financial issues will be discussed, that are important for the Debt Relief Project.

This conference will be attended by all FMS Finance ministers and the FGS Finance Minister and the participants will focus on topics such as, how to improve the state financial system, which is part of the terms of Debt Relief Project that Somalia is prioritising.

The FGS broke ties with Jubaland, and President Farmajo does not recognise Ahmed Madobe to be the legitimate president of Jubaland.

Somalia is in the middle of a sprint-marathon as it expects its debt to be forgiven by February 2020, and in order for this to happen, the federal government and regional governments must co-operate on financial issues.

Somali Political Analysts, consider this move to be emblematic of the New and Pragmatic Political Approach that FGS was forced to adopt.
A week earlier, Minister Bayle met privately with President Madobe in Nairobi, and it is not clear if Bayle travelled to Kismayo with the blessings of Villa Somalia, or whether he is operating autonomously as part of his strong belief that the Debt Relief Project should be put above any internal political skirmish.