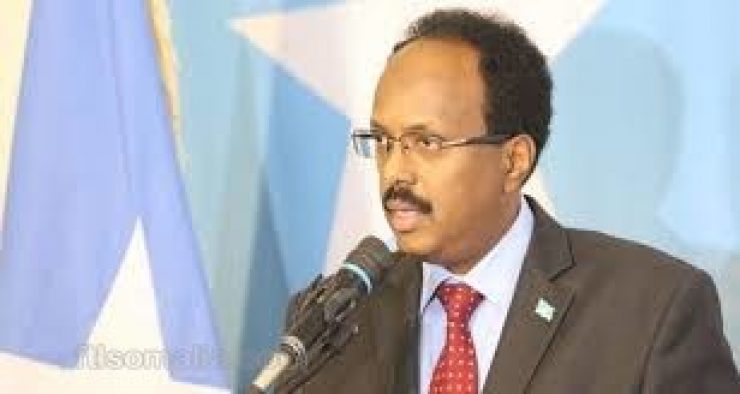 President Mohamud Abdullahi Farmajo has been under intense pressure from the Forum for National Parties (FNP). In addition to that, it now has to handle the growing headache arising from its decision to detain Mukhtar Robow, the former leader of Al-Shabaab, according to Garowe Online reports.

On Friday, many supporters of the former spokesman of Al-Shabaab met in Mogadishu to issue ultimatums against the FGS over Robow’s whereabouts.

They waved placards reading ‘We Need Justice.’ Additionally, speakers at the event condemned the house detention that the government has subjected Robow to while accusing it of gross violations, intimidations, and harassment.

Speakers asked the government to release Robow immediately. The calls come just a year short of the country’s 2020/21 elections. Several top opposition leaders have already ganged up against Farmajo and his government.

Robow was arrested for the first time in November 2018. Since then, he has been in detention. His militia and supporters continue calling for his release so that he can go for the political seat that interests him.

Al-Qaida trained Robow in Afghanistan. He is one of the most recognizable founders of Al-Shabaab, having helped to found it in 2006. For years, he served Al-Shabaab as its second-in-command. The government of the United States placed a bounty of $5 million on his head.

However, the US canceled that $5 million reward for his capture in June 2019 after he defected from Al-Shabaab.

In August 2017, he surrendered following months of talks with the Federal Government of Somalia. There is a growing belief that he turned himself in following the cancellation of the bounty the United States placed on his head.

Since Al-Shabaab’s founding in 2004, except for Robow, who was its deputy director, no other senior operative has defected from the group.

However, a rift within the ranks of Al-Shabaab has led to his defection. The split sees some of the group’s members advocating for the establishment of a global caliphate. Others, such as Robow, believe that the group ought to pay more attention to national issues. He left the group because of failure to see eye to eye with members of the other faction.

For years, Robow has been in constant quarrels with Ahmed Godane, the now-deceased commander of Al-Shabaab. After defecting, he opted to start working with the Federal Government of Somalia.

In October, he announced that he would be running for the seat of President of South West Region in Somalia. However, the FGS began opposing his decision vehemently. Following these developments, FGS decided that it would no longer be backing Al-Shabaab’s former leader.

After defecting, the FGS pledged to support Robow. At the time, he mostly stayed in a Mogadishu hotel for several weeks. As part of the support, the government provided him with a bulletproof car even though it knew he would be using it to campaign for election as the President of the South West State.

However, a difference in opinion emerged between Robow and Mogadishu. The disagreement forced the ex-militant to drop his bid for public office. Instead, the government threw its weight behind the person all along perceived to have been its favored candidate, Abdiaziz Hassan Mohammed, the country’s Minister of Energy and Water.

The country’s Internal Security Ministry publicly rebuked the defector. The ministry released a statement where it said that Robow was ineligible to contest for the regional elections. The report further noted that despite the cancellation of the $5 million bounty placed on Robow’s head, the US Treasury Department had yet to remove his name from its sanctions list. Consequently, the FGS would have to negotiate with international bodies first before clearing him for any political seat.

A Somali MP, Abidrizak Mohamed, says, “Thousands of people have lost their lives because of Robow’s ideology. His beliefs have caused untold suffering to thousands of Somalis. Does he care what his victims feel about his candidature?”

Robow ran a campaign with the slogan “Security and Justice.” However, that presented the electorate with a difficult choice. They had to choose to either embrace defectors from the militant group for security’s sake or hold every one of them accountable while pursuing justice.

Meanwhile, Ethiopia stands accused of working closely with the Federal Government of Somalia to not only arrest but also detain Robow for expressing political ambitions. During Robow’s arrest in Baidoa, around 11 people lost their lives in a clash between his supports and government forces.

Criticisms aimed at the decision by President Farmajo’s government to arrest and detain leaders opposed to its policies continue being advanced by scholars, who also warn of ‘dire consequences.’

“The arbitrary arrest and detention of Robow by the Federal Government of Somalia sets a bad precedent for the country,” said Prof. Stig Jarle Hansen, who teaches International Relations at Norway’s University of Life Sciences.

Sheikh Ali, who serves as Hiraal Institute’s director, thinks that Robow ‘s transformation wasn’t a gimmick. His belief about the genuineness of the conversion is in sharp contrast to the government.

“Robow is interested in defeating Al-Shabaab. He believes they stand for everything that goes against Somali society and culture. That remains his position now,” concluded Sheikh Ali.

On Friday, several leaders showed their solidarity with Robow by calling for his release. Those calls have heaped more pressure on Farmajo. They come hot on the heels of the ever-growing political undertones in Somalia that seem to be the theme ahead of the 2020/21 elections.

If Robow contests and wins the South West presidential seat, he will join Ahmed Madobe in the list of ex-militants who defected from the militant group to lead regional governments around the country.

Farmajo has feuded endlessly with regional governments in Somalia. Some of these governments openly enjoy the backing of the country’s former leaders. Madobe is one of the leaders who have been feuding with President endlessly.